You can learn to drive...guaranteed!

Robodrive is the way forward in learning to drive.

Don't pay an instructor to practice in their car

Don't pay an instructor to practice in their car

my pupils say it's a no brainer 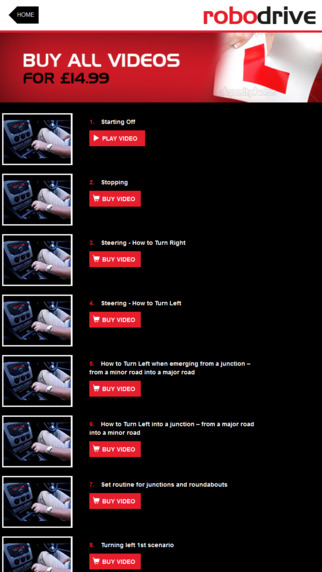 A Driving instructor has created an innovative way for learners to master the road-using their mobile phones.

Tony Allen created the Robodrive app earlier this year after recognising how expensive and time-consuming learning to drive can be.

He decided to design something to help people learn to drive at a lower cost and at a faster pace.

Robodrive, which can be downloaded free on iphone and Android devices, enables people to learn the basics of driving at home without a car.

The app consists of 19 short video clips which show physical routines to practice at home which will prepare the user for their driving lessons.

It was previously an online course, before Tony decided to take it mobile.

Speaking of his motivation to create the app,Tony said; "We would go and speak to young drivers and, obviously, when we asked who wanted to learn to drive, they all put their hands up.

"But when we asked if their parents had the money to pay for their lessons, only a few put their hands up. So, I decided to create the app to cut costs.

"The app mostly works on muscle memory. If you practice doing an action you would do while driving, like changing gears, for 10 minutes,your muscles remember it when you are next in the car.

"A lot of people do not have access to a car outside of their lessons when they are learning to drive, so this allows them to practice what they have learned outside their lessons, meaning they will progress faster.

"The videos prepare learner drivers for their lessons, help to eliminate nerves and give them additional confidence when it comes to taking their test.

"It's also guaranteed to save them a lot of money.

"It's a small fee for each video, but that's a small price to pay in comparison to the cost of hour-long driving lessons,"

Tony, of Baglan, says he sees the app as part of the future for teaching peopleto drive.

He said; "This app is the new way to learn and teach yourself to drive. It's the future of learning to drive."

This will reduce the time it takes to learn to drive, give you additional confidence when it comes to taking your test and save you lots of money.   guaranteed!

After a pupil uses the Robodrive system it enables me as a driving instructor to guarantee that  : within your first two hours in the car you will experience all the points below.

If you can't do that your next two hour session will be free!

"This is a new way to teach yourself to drive".

"the Robodrive system is so straight forward and ingenious. "

" with Robodrive I soon felt comfortable behind the wheel."

" Robodrive is the way forward in learning to drive."

"the Robodrive drive system meant I was able to practise

at home at my own pace,"

"The beauty of Robodrive is you teach/train yourself to drive

"The Robodrive system is what you want,"

"The driving system, Robodrive, helped me gain the

confidence and knowledge to pass my test first time after

only a short time learning."

"The Robodrive system does not allow doubt to become

"lucky to have been taught the Robodrive system"

the roads would be safer."